Hard rock music is characterized by soaring vocals, strong drums, loud and rhythmic electric guitar and bass guitar. It is a sub-genre of rock ‘n’ roll music. A band performing this style of music typically has a frontman, rhythm guitarists, a drummer, and a bassist. Some of the bands in this genre are Deep Purple, Dream Theater, and Dragged Under.

Hard rock songs often feature repetitive, rhythmic, and distorted blues-based riffs. They also feature guitar solos. A heavy or hard feel to the song is provided by deploying feedback. Just like many other sub-genres of rock, the roots of hard rock can be found in American blues. Songs belonging to the hard rock style are meant to be energizing. They hinge on themes such as freedom, partying, sex, and beautiful partners.

Hard rock originated from American blues and the performances of artists such as Hubert Sumlin and Elmore James. The bands belonging to the era of the British Invasion were strongly influenced by blues. The amplified and assertive work of the electric guitar laid the foundation of hard rock. Louder and more heavy vocals and guitar riffs were added to the blues format.

This can be felt in songs like My Generation by The Who and You Really Got Me by The Kinks. Feedback, longer guitar solos, and acts of distortion were added to the blues-rock sound. The credit for this should go to psychedelic rock performers such as Jimi Hendrix. Even The Beatles had explored the hard rock style with songs like Revolution.

Led Zeppelin, Black Sabbath, and Deep Purple were the bands that took a hard rock to greater heights. This was made possible with the release of their debut albums in 1969 and 1970. All these bands had tremendous sonic power in their riffs. The similarities between the acts of these bands were only in this particular aspect. The acts of Deep Purple and Led Zeppelin were purely based on hard rock.

They swung on rhythm and blues riffs. Singer Ozzy Osbourne and guitarist Tony Iommi of Black Sabbath used tones that were heavier, darker, and more distorted. The band also played an important role in the first wave of heavy metal. Sounds of Deep Purple and Led Zeppelin were adopted by several other sub-groups of rock. They included bands that belonged to progressive rock, glam rock, and shock rock.

Influence on the metal scene of the 1980s

The Who, Boston, and Queen and several other rock bands defined hard rock in the 1970s. This sub-genre of rock continued to nurture many offshoots. A few bands like Thin Lizzy, AC/DC, and Aerosmith stuck to their blues roots. Others like Motorhead drifted towards metal music.

Van Halen was an innovative rock band that belonged to this era. They created a blend of R&B, pop, metal, and hard rock. This influenced the metal scene of the 1980s and the MTV-friendly ‘hair metal’. The harder-edged bands like Guns N’ Roses and Quiet Riot had also influenced the 1980s metal scene considerably.

The dominance of hard rock

In the 1990s, the amazing rise of speed and thrash metal lessened the dominance of hard rock. This happened mainly owing to the acts of Metallica, Nirvana, Alice in Chains, and Soundgarden. Despite this, the established hard rock bands like Aerosmith continued to flourish.

A new breed of hard rock bands came to the fore by the 2000s. They also included alternative bands such as Foo Fighters, Creed, The Black Keys, and The White Stripes. 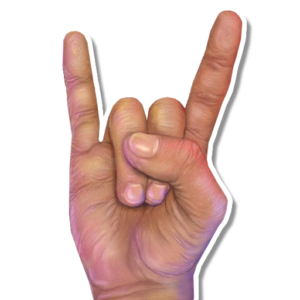